How we sidestepped an App Store catastrophe

UPDATE: The app has been approved since I originally wrote this post. The app review delay had nothing to do with technology choices, and Apple has been fairly quick to approve updates since.

I submitted Outbox's iPad app for review on July 10. It went into "In Review" status on July 24, where it has remained ever since. Actually, it was rejected once on August 22 because the demo account credentials I gave didn't work, despite server logs showing 2 logins on the demo account from Cupertino. I resubmitted, saw 4 logins the following day, and have heard nothing since. My expedited review request was denied. The request status update feature in iTunes Connect is a joke because it takes a week to get a response that the app is still in review, which of course I can see in iTunes Connect. Apple Developer Relations can't help because they can only contact the review team through the same channels I can. One of Outbox's founders even contacted a handful of friendly VPs at Apple for help, and still nothing.

So here we are 2 months later (and counting), still in review.

For a while we continued to plan our launch for "after we get approval" thinking that the app was bound to be approved soon since it had already been so much longer than the average review time, but the weeks kept slipping by and we were forced to delay our launch week after week. Finally, we came to terms with the fact that Apple will get around to approving (or rejecting) the app whenever they damn well feel like it. It could be tomorrow or it could be a year from now. The important lesson I learned is if your product lives in the iOS App Store you are forfeiting control over your release schedule. Have a backup plan.

Fortunately the Outbox iPad app is built with Javascript, HTML, and CSS. The app calls into native extensions for functionality like contacts and notifications as needed through PhoneGap, and makes heavy use of hardware accelerated transforms to get a native look and feel. So after a short discussion, we decided to launch a web app with support for iPad only (we haven't optimized for different aspect ratios or mouse interaction yet). This required almost zero additional effort because this is how we test the app most of the time anyway. The native bits that the app depends on degrade gracefully in a browser when they are not available. The only thing that needed to change was the email confirmation at the end of the signup process which now says "go to this URL on your iPad" instead of "download the app from the App Store". Our designer whipped up a screen with some instructions for the user to pin the app to the home screen when they follow the link from the confirmation email: 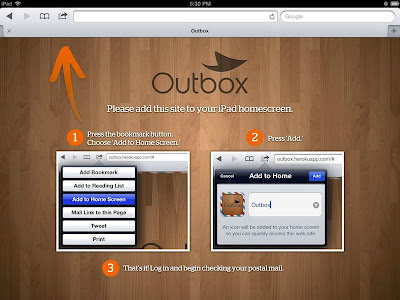 In some ways the web app experience is actually better than the app store version of the app. Nitro is available in chromeless web apps, but not in UIWebView, so Javascript execution gets about a 5X speed boost. At any rate, launching the web app beats the hell out of sitting around waiting when we could be making money and iterating on the product. Had we built a fully native application to begin with, turning around to build a web app would likely have taken weeks, if not longer. And if nothing else, it feels good to own our release schedule again.

We just launched in Austin, so if you live in Austin, try us out!
Posted by Unknown at 3:48 PM