Hidden deep inside TortoiseSVN is a reporting tool that can give you statistics about commits to your repository. I ran this report at my day job several times over the years and the output has always been a quiet source of pride for me. I decided to publish the report here since I'm moving on to a new project. If nothing else, it serves as a reminder to myself of what I spent in the last four years doing: 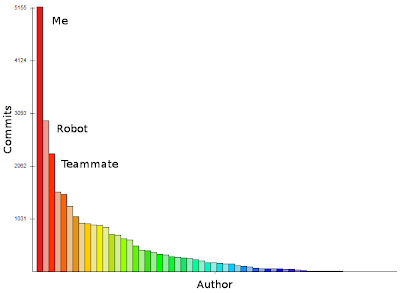 This is the commit history for the entire four years of the project up to the date when this post was published (names have been removed to protect the innocent). I account for about 18% of the total commits to the repository. One of my teammates (who incidentally owns the third highest bar in the graph) claimed that I average 7.5 commits per hour assuming a 40 hour work week (ha). I think his math might be a little off since I calculated a significantly less impressive 5 commits per day when I ran the numbers... although maybe his numbers are a little closer if you exclude the year I served in management.

This can't be fair, can it? I've been on the team longer than anyone else at this point, so of course I've amassed more commits. Well, let's look at the commit history for one month during which the team membership was relatively stable: 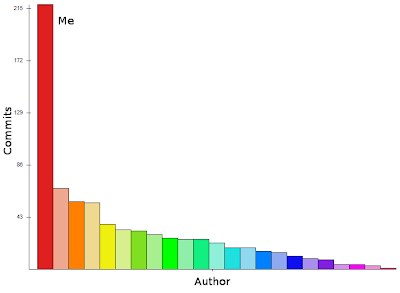 Me again, and by a wider margin, too.

A lot of my teammates were shocked as these graphs made their way around the team, but there are benefits to working at this pace:

For me, writing software is all about momentum. I am more stressed out at the end of the day if I don't commit a whole bunch of code.

Happy committing!
Posted by Unknown at 8:48 AM